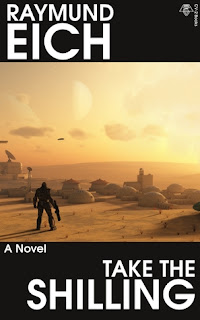 I first met science fiction author Raymund Eich all the way back in 2001, when we both attended the Clarion West writers' workshop in Seattle. Back then, Raymund was already writing smart, original science fiction with more than half an eye on the science. Now, with the release of his fourth novel, I figured it was time to catch up.


The Confederated Worlds implanted in his brain the skills to make him a soldier. He had to learn for himself how to survive interstellar war.

Tomas Neumann enlists to escape his widowed mother's strict religious household. Implanted skills ready him for combat against the Unity forces on New Liberty, but leave him unprepared for scornful comrades, inept leaders, and interservice rivalries. Guerrilla resistance sparks a spiral of atrocities, wounding him in body and in spirit. To survive the war and pursue his destiny, Tomas must learn the toughest lesson of all.

1. "Take the Shilling" is the fourth novel that you've decided to publish independently. You previously had some success selling your short stories to traditional magazines. What made you choose the independent route for your novels?

I envision an optimistic future of "yeoman capitalism." Thomas Jefferson advocated an agrarian republic, where everyone was a self-employed, middle class smallholder. Computers, the internet, just-in-time manufacturing, and supply chain management make possible a high-tech version of Jefferson's dream society. Recent advances in ebooks, print-on-demand, and their related infrastructure now allow a writer to enter the publishing industry, so I decided to put my money where my mouth is.

2. In "Take the Shilling", your hero Tomas Neumann becomes a soldier to escape his strict upbringing, but it doesn't turn out to be quite what he was expecting. What inspired his story?

If you'll pardon a chemistry metaphor, a lot of elements of the story were in solution in my subconscious for a long time. I read the military sf classics, "Starship Troopers", "The Forever War", "Ender's Game", etc. a long time ago. Lodged in my mind for a while has been the phrase, "The purpose of all other combat arms is to put the infantryman in sole possession of the battlefield." Following Bruce Sterling and others, I knew space settlements will never pay for themselves, so it occurred to me the only ones will be religious or ideological communities. From Lt. Col. Dave Grossman's book "On Killing", I took the lesson that for a normal person, killing another is a harrowing experience.

Continuing the metaphor, the seed that crystallized those elements was the birth of my son. He got me thinking about what it means to be a man and how to be a role model. Tomas' father died years before the novel opens, and Tomas enlists in search of the masculine mentoring he never received. Of course, it isn't as simple as he expects!

3. It's been observed that the golden age of science fiction is twelve years old. What books were you reading when you were 12, and do you think they've influenced your writing since?

When I was 12, I first read Clarke's "Childhood's End", and it turned me into a lifelong sf fan. Clarke's depiction of a world of peace, order, and good government, where everyone was free to pursue their happiness, was and is very attractive; and the final chapters were the first taste of sense of wonder I ever received. My prose style is somewhat Clarkean--fairly unadorned, with emotional depths lurking beneath a stiff-upper-lip, northwest-European reserve.

The only other book I can recall reading at that age was Ben Bova's "Exiled from Earth". It's nerd-porn: the best and brightest are not welcome in an overcrowded, crime-ridden future Earth, so when they are exiled to a space station, they make a better society than the one that expelled them. I don't think it's influenced me--I hadn't thought about it for years, until you asked the question--except maybe in a negative way. While my good guys usually win, their victories come with costs, and their triumphs are local and, in historical time, temporary.

4. What's coming up for you next in terms of your writing? Are you working on a new novel?

In a change of pace, I've nearly finished my first fantasy novel. Entitled "A Prince of the Blood," it's set in a secondary world with a renaissance/ancien regime feel transformed by the recent rediscovery of ancient magic. The story itself is inspired by a theory of the Man in the Iron Mask, that he was Louis XIV's biological father. It should be published by CV-2 Books under the byline "Eric H. Munday" sometime in Spring 2013.

After that, I'll be working on a sequel to "Take the Shilling", with the working title "Operation Iago." It's set in a hot peace following the armistice ending the war taking place in the first novel. I'm targeting publication for late 2013.

5. If you were only able to give one piece of advice to a new writer, what would it be?

Assuming he/she knows Heinlein's Rules, understands what good storytelling is and that it covers a multitude of sins, and that Browne and King's "Self-Editing for Fiction Writers" covers most of the sins remaining, my one piece of advice would be: Stick to your vision. You can't please everyone, so don't try. Don't force in a sex scene, don't delete one, don't force a story to pass or fail the Bechdel test, don't make all your non-straight white male characters into saintly exemplars of the virtues political correctness says they must express, don't connect the dots according to a Hollywood screenwriting formula, etc. A story can only inspire a reader if the writer was inspired to write it, and that inspiration only comes from your unique vision. Your unique vision comes from your subconscious, not from a minister's pulpit, a professor's Powerpoint slides, or the state of the art in your genre. Better half the readers hate your work than all the readers say "meh."

If you think you have to please everyone to be a bestseller, well, are you doing this for fame, or because you love telling stories? If the former, quit now, and save yourself a lot of time and heartache. And if you publish independently, you don't have to be a bestseller to make a living writing. If you write consistently and sell 10,000 copies of a novel worldwide, you could earn a middle class income. It may take decades, but again, are you doing this to make a quick buck, or because you love telling stories?

6. What five science fiction novels do you think every SF fan and every SF writer should read?

Other than "Take the Shilling"? :) Here's a quick list.

"Childhood's End", by Arthur C. Clarke. For reasons I gave a few answers ago.

"Hyperion" & "The Fall of Hyperion", by Dan Simmons. Technically two novels, but the first ends in a throw-across-the-room way that will annoy you if you don't have the sequel ready at hand. Treat them as one and you'll be much happier. It's space opera, not hard sf.

"Schismatrix", by Bruce Sterling. You might as well pick up "Schismatrix Plus", an omnibus of this novel with five other stories set in the same universe, because that will give you a copy of "Swarm," one of the best short stories in the history of sf. This universe of Sterling's is the second best example of "stick to your vision" on this list.

"Aristoi", by Walter Jon Williams. It's got space opera, sense of wonder, utopia and its underside, and psychological depth. The daimones, subpersonalities of the human galaxy's philosopher kings, are the best embodiment of full, healthy integration of conscious and subconscious minds I've ever seen in, not just sf, but any work of fiction. This is the best example of "stick to your vision."

"The Book of the New Sun", by Gene Wolfe. Technically four novels, with a fairly simple plot of exile and return, set in a densely imagined dying Earth and stuffed full of unreliable narration, rich language, and deep themes. Plus, I live five blocks from Wolfe's childhood home.

"Take the Shilling" is available from Amazon USA, Amazon UK, and a bunch of other places. 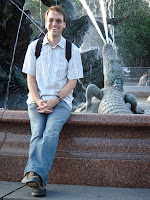 He lives with his wife and son about thirty miles from Johnson Space Center.

For more information about Raymund's novels and short stories, visit http://raymundeich.com/.
Posted by Patrick Samphire at 13:17

Patrick, thanks again for asking a lot of good questions. For readers interested in paperback editions of Take the Shilling, Amazon is currently offering them at 10% off.