This week I've completed a couple of new covers for ebooks, so I thought I'd blog a little bit about the idea and process behind these covers. 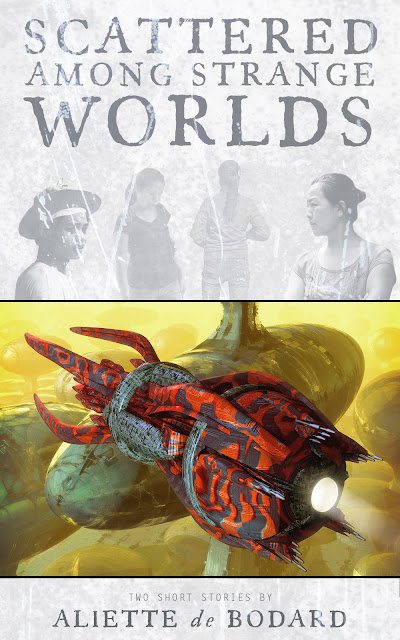 If you read modern science fiction at all, you can't have missed the impact that Franco-Vietnamese writer Aliette de Bodard has made in the last couple of years. Not only has she been nominated for the Hugo, Nebula and Campbell awards, and won the British Science Fiction Association award, she has also had published three 'Aztec Mystery-Fantasies' novels to much acclaim.

This ebook consists of two recent short stories by Aliette: Scattered Along the River of Heaven, and Exodus Tides.

A book cover needs to give a potential reader the immediate impression of the kind of book it is, and what a reader can expect when they open it. It doesn't, however, need to illustrate a particular scene or character from the book.

The two short stories in this collection are both science fiction, the first a far-future space opera, the second a set in near-future France. Both address the theme of immigration. Aliette's writing also is more literary than pulp (although it's certainly not slow or dull!)

The initial concept was to combine a clear space opera image with a group of Asian characters walking into the fading, unknown distance, to illustrate a diaspora scattering to the strange, distant worlds.

However, it is enormously important that an ebook cover in particular works at a thumbnail size. That means it certainly needs to be clear at a height of 115 pixels (the standard height of an image on the Amazon search results screen). Illustrating that group of people walking away in the small amount of the cover that is given over to that part of the illustration would mean it would be impossible to make out what was going on at thumbnail size.

So, I made the group of figures standing closer together, as though in a group.

The photos of the figures all come from Flickr, incidentally; it's an excellent source of photography that you can use in covers. You need to choose photographs released under a Creative Commons Attribution license (and, of course, you need to provide the credits for the photos in your ebook).

The textures that I've used in the grey section of the cover are designed to give that impression of uncertainty and unfamiliarity that people emigrating (not always willingly) can experience.

Scattered Among Strange Worlds is due to be published as an ebook at the end of July. Look out for it. The stories are excellent!

Revenge of the Homecoming Queen - by Stephanie Hale 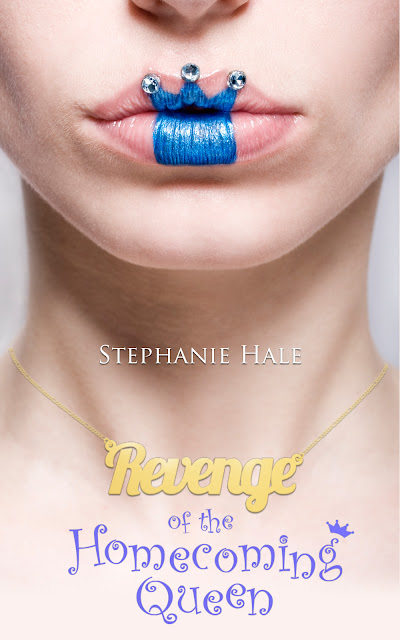 By contrast, Stephanie Hale's Revenge of the Homecoming Queen is a sharp, funny YA novel with elements of mystery and romance . Here's the Goodreads description:


All that matters is what's inside...as long as there's a tiara on the outside.

The flawless Aspen Brooks was born to be Homecoming Queen. Naturally she's dating the most popular guy in school, and she's blessed with stunning good looks, excellent style, and mega brains. She's got the crown in the bag.

So why is the tiara being placed on the skanky head of cheerleader Angel Ives? The confusion only grows after ultra-dork Rand Bachrach is crowned king. To Aspen's shock and horror, Angel actually accuses her of being behind this. Whatevs!

But then something goes terribly, terribly wrong. Strange things start happening--even stranger than Angel beating Aspen. Now someone's leaving her threatening messages and slashing her tires. She's sure it's that beyotch Angel doing these things. And if Angel wants war, by Dooney & Bourke she'll get one.

Revenge of the Homecoming Queen was first published in 2007, but it has never had an ebook edition until now.

Stephanie came to me with a really strong concept for the cover. She wanted this particular photo of a young woman, but she wanted a chain necklace with the word "Revenge" on it added to the photo, as part of the book title. She also wanted a fun, 'girly' font to contrast with the more serious, high-impact photo.

I'm really pleased with the way the necklace (and the whole cover) came out. The hardest part of drawing something like the necklace onto this particular photo is that, if you look closely at it, you'll see that the photo is strongly focused on the lips and face. The neck is actually slightly out of focus, so to realistically add another element to this part of the photo, the other element actually has to be de-focused too.

That means slightly blurring the chain, and increasing the blur on it as it curves around the back of the neck.

For realism, the word "Revenge" should have been blurred too, but it also needs to be readable at various sizes, so I chose to only add a small amount of blur to the word on the chain.

Revenge of the Homecoming Queen is available now as an ebook from Amazon.com and Amazon.co.uk.


A Couple of Tips


If you're designing your own ebook cover, here are a couple of random tips from these two covers.
Okay, that's all for these covers. I really didn't mean to go on so long, I promise!

P.S., if you want to see more of my ebook covers or if you're interested in hiring me for your covers, you should check out my ebook design website.
Posted by Patrick Samphire at 20:16

I love these covers, and what a fascinating post. Thank you!

I love them both. You found such great images to work with. Where'd you find the spaceship one?
FYI, I noticed that on your website, the wrong title is written under the Revenge of the Homecoming Queen thumbnail.

These look amazing! Thanks for sharing!

Thanks, everyone, I really appreciate it.

Lisa: I get most of the images I use from istockphoto or dreamstime. The spaceship came from dreamstime.

Thanks for pointing out the mistake on the website! I've fixed it now.

I love my cover! And Patrick was so awesome to work with! :)