Okay, I've held off on this for most of a week, but that's the extent of my self-discipline, so here goes:

My middle grade novel Secrets of the Dragon Tomb is going to be published by Christy Ottaviano Books (an imprint of Henry Holt / Macmillan) in the US and Canada!!!

My wonderful-fantastic agent, Jenn Laughran, gave me the news last week, and the announcement was in Publishers Marketplace over the weekend.

A few of you might remember Secrets of the Dragon Tomb from when I was writing it a few years ago. It's steampunk! It's a thrilling adventure! It's set in the Regency. On Mars. It's full of despicable villains, deadly clockwork machines, unlikely spies, and terrible peril. And it has pterodactyls. Of course.

If I can be slightly immodest, I absolutely love this world. I don't think I've ever had so much fun coming up with ideas and writing the characters as I did for this, and I'm so excited that I'll get to share it with other people.

I can trace this book all the way back to when I was about 16 years old. (I am now *ahem* 41 years old, so, you know, that's an awful long time...) My parents gave me a fantastic book, called The Illustrated Book of Science Fiction Ideas and Dreams, by David Kyle. 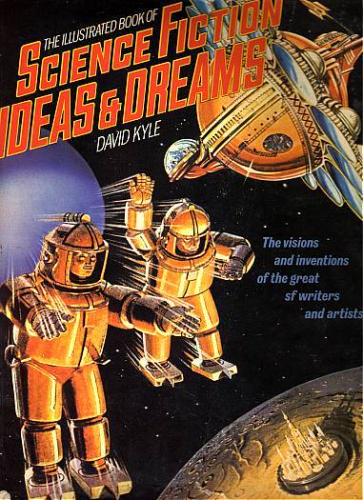 It's a wonderful book. I still own this book (I actually now have two copies), and am known to wave it around frequently, most recently at a steampunk panel at Bristolcon. (I was on the panel, not waving it from the audience. I'm not that crazy...)

The book gives a history of science fiction writing and art from its earliest origins right through to the mid-70s. The bits that really wowed me most of all were the stuff on early pulp, and the stuff on Victorian science fiction, particularly the work of the French artist, Albert Robida, whose fantastic flying machines and elaborate futuristic ideas were an enormous influence on me. 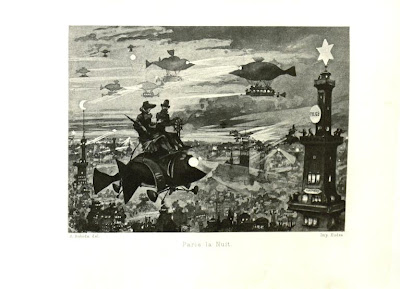 (You can see a bunch more of his work here, or, you know, on the internet...)

Add a touch of Jane Austen, some Indiana Jones, and some sub-Wodehouse humour, and, well, you're probably going to just end up confused. (Yes, I will have to come up with a better elevator pitch than this...)

Right now, I know absolutely no other details about the publication. I don't know when the book will come out. I don't even know if it'll keep the same title. I do know that it's going to have internal illustrations (*faints with excitement*; I love books with illustrations), and that it's part of a two-book deal, but I don't yet know what the second book will be.

YAY! *Lies down again in excitement* (This is the lazy person's version of excitement; you may jump up and down in excitement. I lie down. With chocolate. And green tea.)
Posted by Patrick Samphire at 11:00

W000000000t!!!!! This is the best news and about damn time, too! Loved the draft I read and can't wait to see the finished book with drawings. Big congratulations!

I was excited when I saw this deal posted in PM yesterday! Congratulations, Patrick. This is a simply wonderful book and I love the world and the family in it so much. I also love seeing great books get published and hard work paying off!

I was excited when I saw this deal posted in PM yesterday! Congratulations, Patrick. This is a simply wonderful book and I love the world and the family in it so much. I also love seeing great books get published and hard work paying off!

Congratulations, Patrick! I'm so excited for you! Happy, happy news!

Congratulations! I love the idea of added illustrations.

Congratulations! It sounds FABULOUS! How wonderful!

I am SO SO happy for you!

Thanks, everyone! I really appreciate it.

Congratulations!! So happy to hear this news!

Great stuff, keep us updated, I'll be picking up a copy!

Stephanie sent me here to say congrats and so--congrats omg yay!!! Congrats on all of your hard work, and congrats on being able to share this world with readers.

CONGRATULATIONS! This story sounds so completely relevant to my interests you have no idea. Definitely bookmarking for future purchasing.

Thanks! Now to write the next book, I guess. :)

Patrick!!! SO EXCITED AND PLEASED FOR YOU! Hooray!