Back, oh, all the way in 2001, I was living near Bristol in the U.K., and I was training to be a science teacher. I'd just quit a job as a publisher/editor of scientific journals, and I'd taught abroad before, so I figured I'd give it a go.

The truth is, I would have been a terrible teacher. I'm a bit of a control freak, and really, that's not exactly a great qualification for dealing with a room of 30 bored teenagers. Oh yeah. Believe me.

Anyway, I was bored and I was flailing around for something more meaningful in my life. And, completely by accident, I found it. I'd finally got back to writing after many years (the benefits of a profoundly tedious job...), and I was spending a fairly high proportion of my 'work' day on Critters, the online writing workshop, critiquing other people's work and having mine torn to bits in return.

Sometime in that period, I heard of Clarion West, the actual, real, live, in-person, face-to-face, six-week, bootcamp of a writer's workshop which was held in Seattle each year. I didn't have much expectation of success, but I fired off an application anyway, and pretty much forgot about it.

Then, suddenly, out of the blue, I got a phone call from one of the administrators of the workshop saying that I'd been accepted. Wow. I don't think I came off very well in that phone call. When I'm surprised or shocked I tend to revert to a very neutral, calm, unemotional facade. Here I was, getting incredible, exciting news, and I reacted like I was being told I was due a eye appointment. Man, I'm so cool...

I'd wanted to be a writer since I was 14 years old. At 14, I'd been absolutely sure I would sell and publish a novel by the time I was 18 (ha!). Every day after school I scribbled away in pencil in my notebook, blatantly ripping off Terry Pratchett and thinking how awesome I was. Then I went to university, and other things took over, but I never stopped wanting to be a writer. Now, here was my chance.

But there was one problem. The workshop began two weeks before the end of the teacher training course I was doing, and there was absolutely no way they were going to let me leave early. (I still have issues with this: I had finished and passed all the assignments and the teaching practice, and the last two weeks had no formal classes; I'm sure we could have figured something out to make up the attendance requirements. Still.)

I decided to go to Clarion West anyway, and screw the teaching qualification. So I did.

It really was the best decision I ever made. Not only did I meet my future wife, Stephanie Burgis, there, but I learned more about being a writer than I did in all the years before or since. And two of the stories I wrote in those six weeks were subsequently published. I loved it there. I loved the writing and critiquing late into the night. I loved hanging out in people's rooms chatting and laughing and throwing ideas back and forth. I loved wandering Seattle.

I even loved the class's trip to see AI, possibly the worst SF movie I've ever seen.

Most of all, I loved my classmates and our instructors. In our very first week, we were taught by the great Octavia Butler (and she even liked my story!) Yeah, we had our tensions and our bust-ups. We ripped into each other's stories, and gritted our teeth when others ripped into ours. But despite it, we stayed friends. We went through that fire together.

Almost eleven years later, most of us are still in touch.

And today, we are launching an anthology of stories from eleven of the participants in Clarion West 2001. Best of all, right now it's free to download from Amazon!

Here's the table of contents:

Under the Needle's Eye

The Worry Doctor by Linda DeMeulemeester
Angelfall (novel excerpt from Book 1) by Susan Ee
Selling Short by Raymund Eich
Everyone Gets Scared Sometimes by Ari Goelman
Ruined Spa Day by Samantha Ling
Coyote Discovers Mars by Emily Mah
The Guy Who Worked for Money by Benjamin Rosenbaum
Everybody Stops at Boston's by Allan Rousselle
Rosamojo by Kiini Ibura Salaam
Lavender's Blue, Lavender's Green by Patrick Samphire
The Fire in Your Sky by Ibi Zoboi

The anthology was organized by the enormously energetic Emily Mah with Raymund Eich (equally energetic, no doubt, but in a much more manly way). My story is a reprint of a story that I published in Realms of Fantasy in 2005.

Under the Needle's Eye is free for just two days, so go get it! Even though it's from Amazon, you don't actually need a Kindle to read it; there are free Kindle apps for computers, tablets, etc.

Here's the book trailer, again made by the I-don't-know-where-she-gets-the-energy-from Emily Mah (who also publishes as E M Tippetts; check out her books). It's pretty awesome.


The anthology cover is a joint effort by Raymund Eich and Emily Mah. 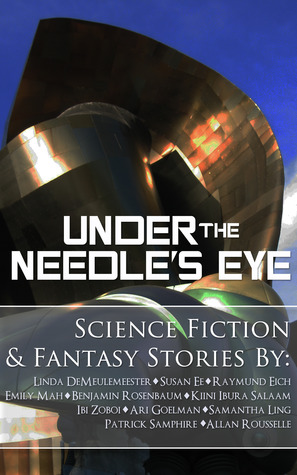 Go get it while it's free!
Posted by Patrick Samphire at 18:43